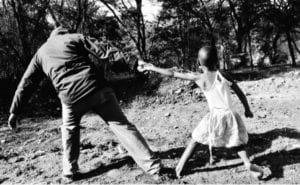 Jane was 6 years old when a man first defiled her, changing her life forever. You could see the hurt in her eyes, the pain, and sorrow that filled her soul. Wishing that she was never born, she had to live with the harsh reality that she had been infected with HIV/Aids. Life was never going to be the same again.

Jane’s single mother was an alcoholic who earned her living as a commercial sex worker. She never was aware that the men she brought to her one roomed house constantly defiled little Jane. At the time of her rescue, Jane was severely malnourished, had sustained permanent injuries due to being defiled and was battling with HIV/Aids.

Jane was among the first children that MCF rescued in 1989, and she soon died and went to be with the Lord. Many children in MCF have very similar stories, the latest being a young girl of 7 years who we welcomed into MCF on 20th December 2018.

MCF has been on the forefront working with the children’s department to prosecute the people who have committed such crime to young boys and girls. A lot of the criminals go scot-free due to lack of enough evidence. Consequently, MCF works with over 40 schools and communities around us to train them on Children’s rights and justice, in order to put an end to the animosity against children.

Please pray for the inner and external healing of the many children you see smiling in MCF who are survivors of defilement; that justice will be served as we follow up on the pending cases in courts. That God will give us more resources to carry out advocacy as we create awareness on the plight of children in our communities.

Psalm 82:3 (KJV)
Defend the poor and fatherless: do justice to the afflicted and needy.

Psalm 89:14 (KJV)
Justice and judgment are the habitation of thy throne: mercy and truth shall go before thy face.